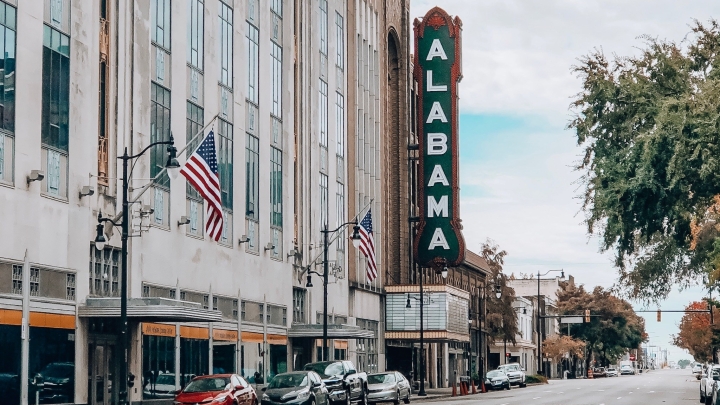 You might have noticed that we travel pretty frequently. Living in different states means it is a big part of our friendship and a part of our careers (more so for me than Kathryn nowadays). There is a large history conference in the south that met in Birmingham last year and Kathryn was able to make the trip to meet me there and do some exploring around the downtown area (where the conference hotel was). We rounded up a few of our favorite places in case you’re planning a visit to the Magic City yourself.

Our first bar of the night was Pilcrow Cocktail Cellar–just like it sounds, it’s downstairs in cellar-like atmosphere. It’s got that dark, kind of speakeasy feeling with some Dia de los Muertos decor sprinkled in. This place is great for a fancy cocktail and the booths have room enough for a larger group.

Next we headed to Paramount, which I highly recommend if you’re looking for a laidback, fun vibe. We watched football and ate some snacks, then we took pictures in the photo booth and played games in the arcade! That’s right; this is half sports bar, half arcade. I actually played Skee-ball for the first time ever at this bar and I definitely recommend a vodka pineapple to accompany that activity.

The next bar was insanely packed with guests from a wedding that had just ended nearby, but The Atomic Lounge was like a maze of different, themed rooms. Each got better as we went along so I definitely recommend at least checking out each of them. We ended up in the back room where we got cocktails that had fresh flowers garnishing them and costumes?! They have an assortment of costumes you can request, board games you can play, and the arrangement lends itself to both an intimate date night or a large party depending on which room you’re in.

Friday night I ended up going out with some new conference friends to a restaurant called The Southern Kitchen and Bar. We mainly chose this place because it was close to the hotel, but it had live music and great small plates. This place does a good job of blending a family-friendly restaurant atmosphere with the perks of a bar (and, of course, it has a fully stocked bar in the middle of the space) so you can get the best of both worlds if you’re out with little ones.

While I was at a luncheon, everyone headed to Saw’s Soul Kitchen. When in Alabama, you have to try the white barbecue sauce. As a vegetarian I don’t personally eat barbecue but I do know there are a TON of options in Birmingham. The very best usually comes from a hole in the wall but if you’re just dipping a toe in the sea of Alabama barbecue, Saw’s will ease you in.

Sunday morning we decided to try out a food hall (we’re big fans of food halls because they give us a little more wiggle room for my veggie needs). We were able to walk to Pizitz Food Hall and each grab breakfast from a different place and a mimosa pitcher from the central bar. We sat here checking our fantasy football scores and shopping postcards for a good while.

The walk from our hotel to the food hall was so cool: downtown Birmingham has a lot of history and fun architecture and photo backdrops and you can learn a lot just strolling through it. We even found a cute little park to stop at and take some fall foliage pictures.

After breakfast we happened to wander into the Birmingham Museum of Art, mostly because it was free and we had some time to kill. The older art made my little historian heart so happy. They also have activities for kids and there were a lot of families wandering through the galleries. My favorite part was the sculpture garden; when we were there it was pretty much empty, great for a romantic walk. But on other days it would be a fun place to hang out in nice weather with your friends or family.

We didn’t actually make it to the McWane Science Center, but I have it on good authority that it is very cool and a must-visit if you’re traveling with kids. It’s four floors of fun for kids of all ages, I know it sounds like I’m trying to sell you but I really just wish I was a kid so I could play in McWane, it looks so cool.

Saturn Birmingham is another places that fuses fun and drinks, but during the day time its a coffee bar (the alcoholic one opens at night). You can bring in your own food and they have both video games and board games so it’s great for groups large and small (or a solo traveler).

I hope you love Birmingham as much as we did. If you try any of our suggestions, let us know what you think! We’d love to hear what you find magical about the Magic City.

2 thoughts on “The Magic City: Our Favorite Things in Downtown Birmingham” 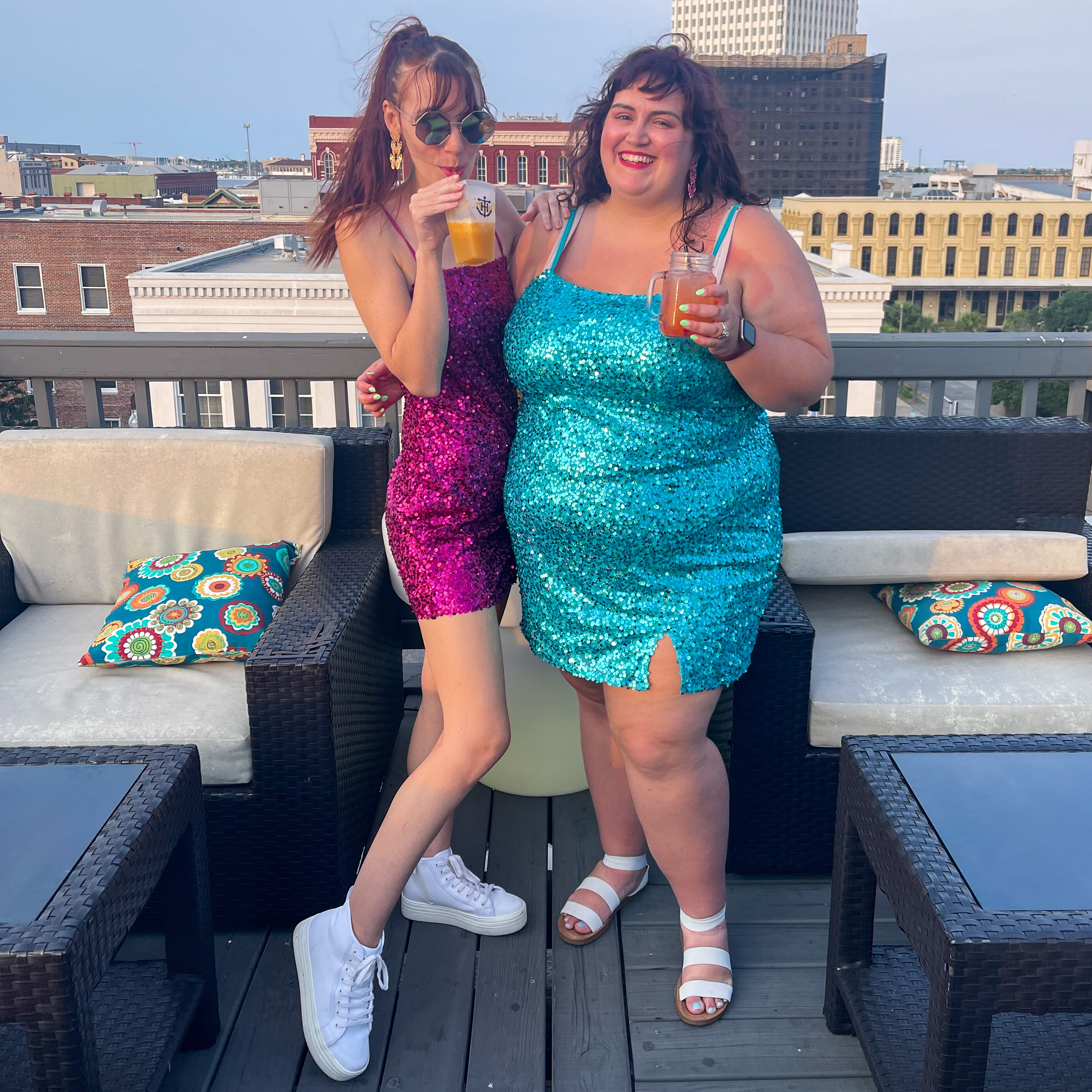 Let’s see how much I regret this outfit when I’m in the airplane bathroom
it’s giving grandpa golf chic 👴🏻⛳️ (these sweaters were Kat’s grandpa’s but now they are ours) #matchingoutfits #sizeinclusive #grandpasweater
The bagel detour did make us an hour late but it was worth it
in every friendship, one person is dressed as the mom, and the other person is dressed as her teenage daughter
Loading Comments...
%d bloggers like this: