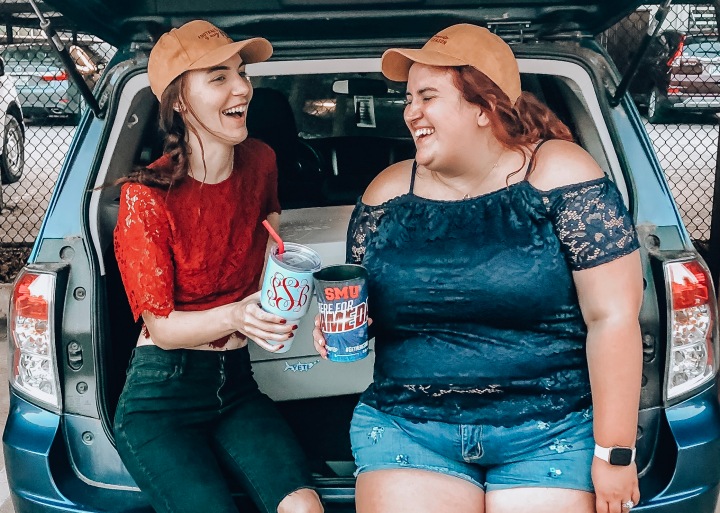 Despite both of us going to undergraduate universities with somewhat underwhelming football programs (DII and DIII teams), we have managed to become fully ingratiated into Division I college football culture. Not only did we both find our way to tailgating after college, but we managed to affiliate ourselves with arguably the two most extravagant tailgating experiences in college football. So extravagant, in fact, that it isn’t even called “tailgating.” For us, you go to the Boulevard or the Grove—both of which have an unspoken dress code complete with assigned colors depending on the week. So, despite rooting for different teams, our experiences are very similar.

Kathryn / I married into it. My husband graduated from SMU, and we go to the Boulevard pretty regularly during football season. The Boulevard is filled with students dressed to the nines, high heels optional but strongly encouraged. Tents range from university-sponsored set ups with shipping containers turned into mini-living rooms with deck furniture and flat screen TVs, catered meals, and bartenders to family-sponsored spots with a cooler of beer and a few boxes of pizza.

Summer / Being an academic nets you an assortment of teams to support, which is how I ended up being a fan of an SMU rival (UNT) and Ole Miss. The Grove is a lot like the Boulevard—chandeliers hanging from tents, catered meals, and everyone dressed like they’re going to a club—if that club was also a sports bar. There are a couple rules you should follow if you don’t want to look like a landshark out of water.

Summer / It’s becoming the norm at large events that you carry a clear bag, and trust me, you do not want to be the girl holding up the gate line because you brought your cute-but-opaque crossbody. A lot of stores and designers are carrying clear bags now, so it’s easy to find cute ones at all price points. Kathryn and I have the same clear bag from Amazon (the red one in the top left corner, mine is in gray), but I’m snagging this snake print one, too.

Kathryn / At the first SMU game I ever attended, I brought a small crossbody bag… that was unfortunately bigger than the security guard’s piece of paper that indicated how big your bag can be. (SMU’s stadium rules used to let in opaque bags.) I was the girl holding up the gate line. We got out of line, put all my stuff in my (now) husband’s pockets, and contemplated hiding my bag in a bush before my friend figured out she could fold the bag and literally stick it in her pants. She was the real MVP. I have since learned my lesson, and I will always bring my clear bag.

Kathryn / Ole Miss is organized enough to publish this handy chart so fans know what color to wear on game days. If only I was so lucky. SMU publishes no such thing. The first home game of the season is always a white out game (tents with bartenders run out of white wine immediately for obvious reasons). Other than that, I’m on my own to figure it out. I’m in an organization with many SMU alumni, so sometimes I’ll ask my friends there. Otherwise, I’ll wear the SMU color that is least like our opponent’s colors that week.

Lucky for us, our current team’s school colors are the same, which means Summer and I both have lots of red and blue in our closets—making it easier for us to match when we are together on game days and also in general. Ole Miss also uses powder blue as a game day color, which I love and am definitely jealous that she has that as an option.

Kathryn / On the Boulevard, alumni dress is pretty mixed. Dallas is a pretty fashion-forward city—the creator of RewardStyle is an SMU alum—and the occasional alum will use the Boulevard as a catwalk. More often the alumni will be slightly dressy because that’s what they’re used to, and some stay super casual in an SMU tee. Seeing as I didn’t attend SMU, I have no school tees, but I do have plenty of red, white and blue, so I keep it dressy casual.

Summer / In the Grove, sporting jeans and a tee will instantly get you pegged as a visitor — while students and new alumni are likely to be more dressed up than the rest of the tailgaters, older alumni generally keep it dressy casual, too. We’re not quite as fashion-forward out here in Mississippi as the Dallasites, so you won’t usually find designer or avant garde styles here. At the beginning of football season rompers and dresses are ubiquitous. Cooler temps usher in sweaters (these Hillflint ones are so cute) with flared jeans or mini skirts and OTK boots.

Summer / Game day requires a lot of walking. I can’t tell you how many novice Grovers I’ve seen walking home carrying their cute heels because their poor feet couldn’t take anymore. I personally struggle to strike a balance between shoes that look appropriate with my outfit and keep me on my feet but let me tell you, if you have to choose a part of your outfit to dress down this is the one.

Kathryn / In the south, the end of summer means the beginning of college football, and a whole new set of fashion trends to go with it. If you are tailgating or going to games this season, we hope this was able to give you some new ideas on how to dress your best for game day.

Zoom ready on top, iced coffee run ready on the bottom 🥤 The new drink+coupon deal fully broke my local Starbucks today (we only have one, small town problems) so I went with my tried and true Panera but if you managed to get your hands on one of those brown sugar drinks pleaseeeee tell me if it’s worth it?
TikTok says we’re wearing joggies so we took that and ran with it, trying our hand at athleisure. Are you team leggings or joggers? (I wonder how much that overlaps with straight leg vs skinny leg jeans?)
It might be sweater weather right now but today’s vaccine news has us getting ready for hot girl summer! I’ve been staring dreamily at swimsuits all evening—drop your favorite size inclusive swim brands, because if I can I will be living in swimwear as soon as it breaks 80 degrees ☀️ 👙 ☀️
What’s 5 x 5? Some might answer 25, but we say: THIS WEEK! It’s been over a year since we’ve done a capsule wardrobe challenge, so we are overdue for a new one. We’ll be wearing 5 base pieces for the next 5 days (not including shoes and third pieces). But this capsule is a little different because all the pieces are from @targetstyle! Stay tuned our other 3 items.
Loading Comments...
Comment
×
%d bloggers like this: